By Raffaella Tenconi November 2, 2018 No Comments

In our view, we are about halfway through the worst phase of the business cycle phase – falling activity and rising inflation – and the latest batch of private sector confidence surveys for October published by the EU Commission supports this interpretation. Industrial sector confidence has fallen more or less everywhere, with a worryingly sharp drop concentrated in the core Eurozone countries. The drop in expected new orders in Germany is worse than during the growth slowdowns in both 2015 and 2012.

Hiring appetite is waning across countries, notwithstanding that companies are signalling bottlenecks in production as a result of labour shortages. Industrial sector hiring appetite was down again in October, but the construction and services sectors’ hiring plans are mixed; thus, it may be several more months before we see the unemployment rate rising steadily in the Eurozone. We note that, in France, there is evidence of a softening of the real estate/construction sector already – something we find quite concerning, given the exceptionally low borrowing costs. In Italy, the advance estimate for 3Q GDP was another disappointment and signals that the economy has no way to offset the downturn in external conditions. On a mildly positive note, hiring appetite remains positive overall and the construction sector is continuing to experience a moderate, but steady, recovery.

On the inflation front, in our projections, inflation is likely to peak around early next year in most cases, assuming that oil prices remain stable around the current levels. Aside from the controversial stance of Italy with regards to its budget plans, we expect to see growing political headwinds coming from Germany, as the ruling coalition is likely to lose further support, and France, where domestic demand is heading for a further deceleration, to the detriment of the approval rating of En Marche. We expect growing political tensions in the core Eurozone to support a further weakening of the Euro in the coming year. 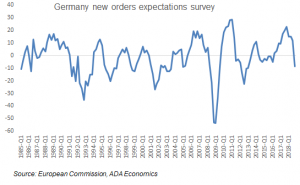