Germany: trip notes from Berlin and other paradoxes

We visited Germany recently as we are coming to the end of our field study in the country. We do not have all the survey responses yet, but we do have a sample large enough to highlight a couple of intriguing results.

In line with what opinion polls have shown recently, the Green party’s popularity is picking up. Why? We have gained some insight on this from our in-depth conversations with people from a range of professions, age brackets and incomes. People’s frustrations with the ruling coalition have increased, in our view, relative to last summer, when we conducted the same survey ahead of the federal elections. The vast majority of active voters we have spoken to see the ruling coalition as ineffective, and lacking genuine vision and interest in leading the country in the right direction. Before the last elections, this kind of malaise led people to think about voting for alternatives; now, it appears, in our view, that people are thinking more strategically, and a lot of voters are opting to switch their support to candidates with the best odds of entering a coalition in the next government – and the Green party are best-positioned to do this. Critically, it is not about the Green party’s policies, but rather a mixture of hope for a bolder leadership, a stronger genuine desire to invest in the country’s long-term social future, and offering an acceptable middle ground in the political spectrum.

The vast majority of respondents strongly defended the need to preserve the EU and the Euro, and did not see it as appropriate to begin a debate on either. However, when asked about how much they would be willing to invest in the European project, we found virtually no supporters for unifying regulations or pooling taxation; in fact, the majority is still clearly not in favour of a united EU military force. This has not changed since our previous survey. Equally interesting, the vast majority of people would oppose a return to the Deutsche Mark, candidly stating that the Euro works well in favour of the German economy. We cannot help but think that there may not be as many enthusiastic positions if the Euro were to stop being openly favourable for Germany.

The frustration that German voters are showing is not dissimilar to the dissatisfaction of other European voters, although the strength of the economy is higher than other member states, so the frustration level is lower than in other countries. The vast majority complain about: rising living costs, on average, driven by the housing market and healthcare premiums; the lack of resources for social services (which is not manifested in wages for teachers being too low, for example, but in insufficient support for teachers who operate in difficult neighbourhoods); inadequate support for single mothers with children; and widely perceived inadequate working conditions for the lowest-paying temporary contracts.

Germany introduced strict fiscal rules post the 2008 global crisis, which forced a tightening fiscal stance in the following years, and are partially responsible for the strain seen particularly in social services and the less developed areas, where insufficient investment in infrastructure accentuates the poor economic prospects.

How does this relate to the upcoming 2019 European elections and the outlook for the political landscape in Germany?

In our view, there are at least three critical links. First, voters’ dissatisfaction with the ruling coalition is likely to show in the European election results, weakening (but not fatally so) the lead of the two strongest political groups: EPP and S&D, while favouring the smaller groups. Secondly, the particularities of the European election system are likely to deliver a victory for the “mainstream”, but this will not stop the steady rise in more extreme positions. The winning group, despite being unlikely to secure a majority of the seats in parliament, will decide the leadership of the next European commission (the strongest institution in Europe if we take into consideration that all regulations come from there). The various “populist” parties are spread across various groups and would not be strong enough to lead the next parliament (although we flag that Fidesz is the best-placed to gain influence), but could be strong enough to stall some of the parliamentary work. The more that frustration increases means that more voters are likely to eventually shift to a bolder party. The far right party, AfD, in our view, is likely to become significantly stronger in Germany in the coming years because the electorate is likely, in our veiw, to find that the incumbent parties, including the greens, will not be bold enough to respond to their needs.

If Europe wants to prosper together, continue to be a global leader in democratic values and enhance its competitive edge, it must increase its willingness and financial commitment to improving social services and infrastructure across its territory, in our view. No other viable solution will achieve all three goals. The union might be able to stay together and maintain some competitive edge via persistent monetary stimulus, but it will inevitably lose its democratic leadership as cost of ignoring the demands of more than half of its population. The union can try to preserve a competitive edge by continuing with the current fiscal strategy and, thus, the leverage on internal devaluations, but it will not prosper together – pockets of poverty are a necessary requirement for this strategy. 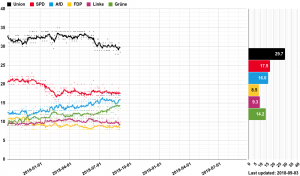