In the last month, the opinion polls in the big four Eurozone member states show that the “populist” parties are losing momentumsomewhat to what may appear to be a return to the “mainstream” parties. In Germany, CDU has gained 5 points since the change of leadership favouring Annegret Kramp–Karrenbauer; in France, En Marche is up 3 points and back on a par with New Rally (former Front National); in Italy, the League is no longer gaining strength, while M5 appears lukewarm, at around 22%. Only in Spain does the situation appear static for all the key players, except for a new entry, VOX, which is quickly catching up to Podemos.

Anyone that believes this heralds the turnaround in the “populist” wave is too quick to draw conclusions, in our view. First, there is a stigma effect: as the “Salvini front” is beginning to take shape and the concerns of an extremist leadership become more frequent in the press, it is more likely that those that may be considering voting “populist” will not reveal that they are likely to do so in a survey. This, in our view, is true both of online and phone-based polling. Secondly, once an active voter shifts their historical loyalty towards a party, it becomes very difficult to go back, even if they find themselves disappointed with their new choice. It is far more likely that they will not vote, but may declare their old preference in a survey. Thirdly, the “populist” wave is not driven by boredom or frivolous arguments, but profoundly reflects the structural changes taking place in the business sector of Europe and the erosion of purchasing power, which is underestimated in commonly used statistics. In this respect, the speech of Prime Minister Conte at Davos was a candid and clear summary of the problem.

The European parliamentary election race has just begun. The Conservatives and Socialist parties are enjoying some momentum at the moment, and both are fine tuning their pitches particularly towards women. The “populist” front is undergoing a strategic reorganisation. Neither side has done enough to win yet, in our view; in particular, neither side has provided a new programme to address the economic mix that underpins their support. In countries where the economy is still buoyant overall, voters’ patience lasts longer, but it is not infinite even here. Regardless of the result of the elections, very big changes lie ahead for the coming years in monetary policy, fiscal policy and capital mobility. 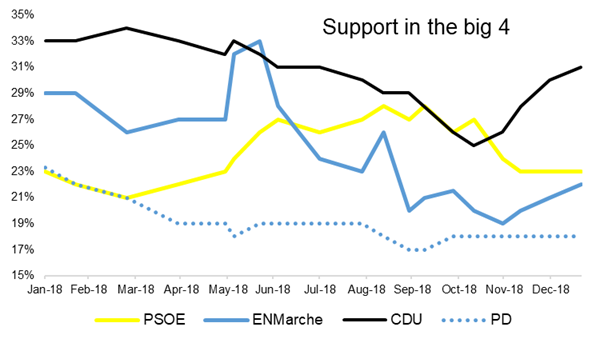