PSD was criticised in October 2018, especially by Dacian Ciolos, leader of +PLUS, of giving pro-ROexit speeches. After the EU Commission raised concerns over the ruling party because of their intentions of approving an emergency ordinance that could have legalised abuse of power, PSD stated that Romania is a “sovereign state” that can do whatever it wants, leading to a negative reaction from the opposition. Also, PSD has been the primary proponent of social developments, through higher wages, higher pensions, and extra taxes on energy, gas and telecommunications companies, as well as on banks’ assets. Also, the latest proposals criticised by the opposition are the budget cuts for national secret services and greater budgetary contributions to the local authorities. Lately, PSD has come into conflict with Mugur Isarescu, the governor of the central bank of Romania, based on allegations about the central bank artificially raising the ROBOR rates in response to the newly-introduced ‘tax greed’.

PNL has strongly criticised the “greed tax”, as well as all the social and fiscal amendments proposed by PSD, arguing that PSD’s intention is to undermine Romania’s economy, its international position and its business environment. In the electoral race, PNL’s leader, Ludovic Orban, stated that an affiliation with the USR and +PLUS coalition, with the aim of supporting the current president, Klaus Iohannis, for a second mandate, is a possibility. Also, PNL has accused PSD of “faking” the deficit, which was expected to be RON 1.3bn higher.

The party was founded in 2015 in collaboration with Calin Popescu Tariceanu, the former prime minister and former PNL president. Currently, ALDE is part of a strong coalition with PSD, but it is very likely that the parties will have different candidates in the upcoming presidential elections, with Liviu Dragnea being supported by his own party, and Calin Popescu Tariceanu proposed by ALDE. The coalition has experienced tougher times as well, when ALDE almost withdrew its support; however, the shared values appear to have brought the two back together, according to Liviu Dragnea.

USR’s main ideology is to fight against corruption and support the European Union integration. Currently, the party is part of a coalition with +PLUS, and is ready to campaign in favour of Dacian Ciolos, if he decides to consider running in the presidential elections. USR initiated the “No corruptive people in public functions” bill, which has been signed by 850,000 citizens. Also, USR is not in favour of boosting wages and pensions unsustainably, but is championing bringing back the young workforce that is based currently in foreign countries through offering equal opportunities.

The party champions Hungarian minority interests, representing approximately 1,300,000 people who identify as Hungarian, as well as liberal conservatism, Christian democracy, regionalism and pro-Europeanism. Recently, UDMR rejected the proposal of cutting budgets for political parties and redirecting the money to children in need, alongside PSD and ALDE. Also, UDMR has shown its political inclination towards PSD over time, but has strongly criticised the fiscal measures adopted in the last days of 2018 without parliamentary debate.

+PLUS (Party of Liberty, Unity and Solidarity): leader Dacian Ciolos (previously the MRI party, which was dissolved recently); slogan – “My project is Romania”; policy bias – centre; current support level – 8.8% for the general elections.

Daniel Ciolos, former European Commissioner and Health Minister, was elected with 99% of the votes as the leader of +PLUS, the newly-founded party (in 2019) that is in coalition with USR currently. The party’s main ideology is to fight against the ruling social democrats and to remain in the EU. Also, Mr. Ciolos has shown his support publicly for Dragos Tudorache, the Minister of Internal Affairs of Romania, as the European Parliament candidate. Also, he is a strong proponent of Codruta Laura Kovesi, the former Head of the National Anti-Corruption Directorate (DNA), as the EU prosecutor candidate.

Pro Romania was founded in 2017 by Victor Ponta, the former co-president of ALDE, and the party believes strongly in social democracy, economic and social liberalism, it is pro-developments and pro-Europe. Victor Ponta supports the independence and credibility of the Central Bank of Romania, and has harshly criticised the PSD’s allegations in regards to sharp deceleration of RON and increase in ROBOR against Mugur Isarescu. Pro Romania is willing to support a candidate for the presidential elections who is centre-left, but who is not necessarily part of Pro Romania, primarily with the intention of minimising the chances of Liviu Dragnea reaching a leading majority. 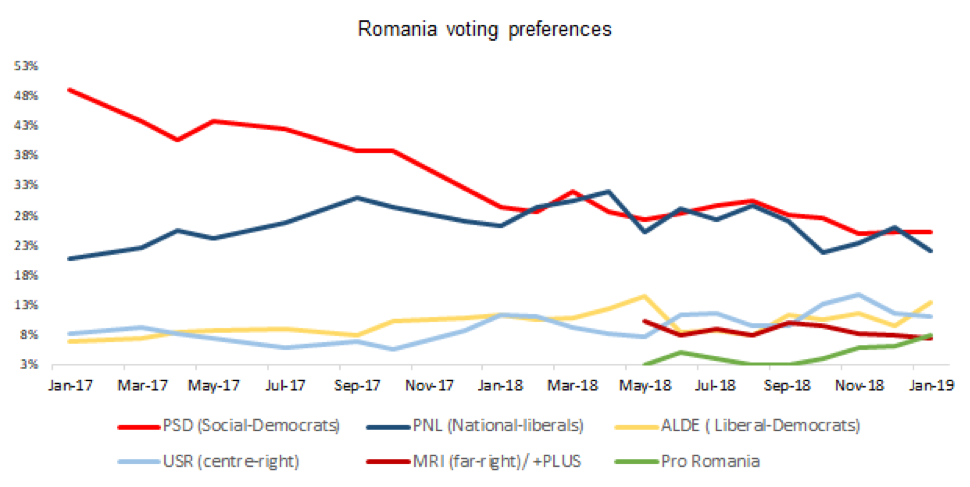