Business cycle – France: Feeling unwell and with no fast pain relief at hand.

The first estimate of 4Q GDP showed that the economy grew by 0.3% qoq and 0.9% yoy: modestly better on the quarter, but slowing on a year-on-year basis for the fourth consecutive quarter. Household consumption growth softened, while net exports improved, on the margin. Going forward, we expect real GDP growth to average at 1% this year, down from 1.5% last year and below the consensus expectation of 1.5% this year.

The monthly surveys published by the European Commission show that France stands out – on a weaker note – in the Eurozone. Not only is it experiencing the moderation in exports that is common in the monetary union and concentrated in Germany, but it is also beginning to experience a marked drop in household confidence, a fall in businesses’ appetite for hiring and a softening of the construction sector. The latter is all the more puzzling, in our view, given that France is a significant beneficiary of the ECB’s ultra-low interest rate policy.

What to make of all of this?
In our view, the labour deregulation introduced by President Macron, together with a mildly tight fiscal stance, is beginning to filter through the economy, notwithstanding the lower unemployment rate. Low interest rates have fuelled a bubble in the housing market, at a time when France is beginning a multi-year process that will inevitably compress the incomes of most. Nobody can escape the wage convergence process in Europe – France is the last one to join this process because, until recently, the labour rules and the solid public administration budget had delayed it.

This mixture is reminiscent of the Schroder labour reforms embarked on by Germany from 2003-onwards, which coincided with several years of German GDP growth underperforming the rest of the Eurozone and earning the infamous title of the “sick man of Europe”. This time, France is unlikely to stand out as much, in our view, as Italy is also caught in a growth bind. However, when considering the protracted period of ultra-low interest rates available to all French parties (private and public), the modest fiscal adjustment demanded of France by the Commission when compared with the Greek and Italian efforts, and the exceptional strength of French non-financial corporate balance sheets, that France is struggling so much is indeed quite surprising.

Periods of balance sheet restructuring, such as the one France appears to have begun, eventually deliver faster potential growth and protracted low inflation. In France, in the near term, this may still be consistent with a narrow victory for En March at the European elections; however, if it is, it may well be the last one for this president. 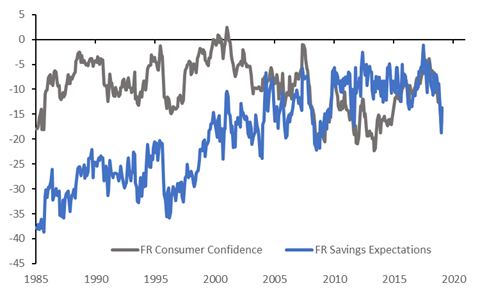