The USD/TRY exchange rate fell to a low of 5.25 in the second half of January, remaining slightly above our model fair value estimate of 5.19, after fluctuating in the range 5.15-6.20 in 4Q18. In October 2018, the risk of a further escalation of the tension between Turkey and the US vanished with the release of Pastor Brunson, the Lira started on a quick appreciation path, which brought it closer to fair value, and the ongoing rebalancing pushed the current account into positive territory and started a credit crunch.

As of November 2018, the current account declined by USD 25bncompared to July on a 12-month rolling sum basis, due mainly to the ongoing recession, while the bank sector credit flow contracted consistently since August. Should the increase in inflation not be tamed quickly, the protracted high interest rates may damage the economy further, and open up room for a more aggressive devaluation of the Lira in the next 12 months. 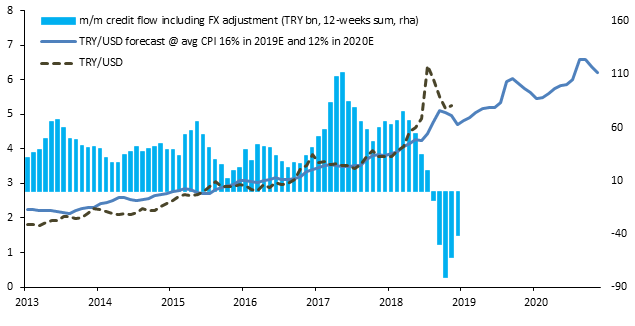