The USD/RUB stood at 66.5 in January 2019, consistent with the fair value our model predicted.

From March to August 2018, the RUB depreciated by around 15.8% against the USD, over the fear of US sanctions. Witnessing this steep depreciation, the Russian government had to pause the FX purchases it had started under the budget rule to build up reserves in order to shield the economy and the RUB from the swings in oil prices. As per the rule, extra revenues generated from the receipts when oil trades above USD 40/barrel would be spent on buying foreign reserves.This has provided the RUB with some support and it has remained somewhat stable since August, although the FX purchases were restarted in January 2019.

The reserve fund, which was set up by the Russian Ministry of Finance (MoF) in 2008, to provide a buffer against contingencies, was almost exhausted towards the end of 2017, owing to the drop in oil prices and the western sanctions imposed on Russia for its actions in Ukraine in 2014. The function of this fund was to top up the budget in times of crisis and when oil prices fell below a certain break-even price, putting strain on Russia’s oil-dependent economy and resulting in sharp currency depreciation. Following this, the MoF terminated the reserve fund and replaced it with a new fiscal mechanism (the budget rule), which was adopted in 2018.

The new rule means that, when oil trades higher than a budget break-even price of USD 40pb, the extra revenue generated goes to the National Wealth Fund (NWF), which is part of Russia’s gold and foreign exchange reserves, held by the central bank. This excess revenue is then used to buy FX reserves from the domestic market, implying that the increase in oil prices is translated into higher FX reserves. The FX purchases serve two purposes: first, to build a considerable buffer for contingencies; and second, to proactively limit the RUB volatility and prevent it from appreciating as oil prices rise. Similarly, when oil prices fall below USD 40bp, foreign reserves will be sold in the domestic market to prevent the RUB from depreciating.

Following the implementation of the budget rule, the MoF, through the Central Bank of Russia, spent around RUB 669bn in 1Q18 to purchase foreign currency from the domestic market, as oil prices averaged at USD 65pb during the period. Similarly, RUB 87 bn was exchanged for foreign currency in 2Q18, as the oil price increased and averaged at USD 72pb. At the same time, the RUB was depreciating steeply against the USD, by almost 16% from March to August 2018, due partly to capital outflows from EMEs and partly to the escalation of the US’ sanctions rhetoric against Russia, which resulted in capital outflows in early-August. Due to this, the Central Bank of Russia had to halt the FX purchases from September 2018, which, if continued, would have had resulted in significantly more depreciation. Due to the temporary pause, FX purchases only worth RUB 533bn were undertaken in July and August, even when the oil price climbed to USD 74pb. The temporary suspension of FX purchases gave significant support to the USD/RUB as it became more or less stable, averaging around RUB 66.7 to USD in the past five months, even when FX purchases resumed last month.

The USD/RUB stood at 66.5 in January 2019, consistent with the fair value our model predicted. Going forward, the RUB seems unlikely to gain the ground it lost to sanctions speculation and capital outflows, especially in the presence of FX purchases.Our USD/RUB model sees the RUB appreciating slightly against the USD in the near term, staying at 65.6 in 2019E and 63.4 in 2020E, respectively, on average. As per the CBR’s assessment, a 10% depreciation of the nominal effective exchange rate adds 1ppt to inflation over a three-to-six-month horizon. Stable USD/RUB rates ahead indicate an improved and clearer inflation outlook, providing the CBR with room to initiate its delayed rate-cutting cycle this year, in our view. 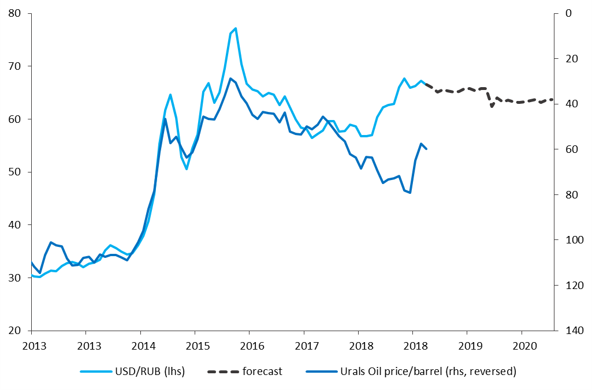