There was no material change in the central bank’s monetary policy statement, released yesterday and that is the real news in our view. The MPC reinforced the message that its sole target is inflation, which implicitly says that there is no critical level of the forint that necessarily needs to be “protected”.

Our inflation projections imply that the MNB will deliver its 3% target this year and the next and, with oil prices rising to USD 100/bbl in the coming year inflation would still remain within the target corridor of 2-4%, but a double whammy of rising food and fuel prices in our view would become more challenging. As a result, in our view, the MNB will very slowly unwind its growth measures and rate hikes, in the magnitude of 100bps cumulative, which will be on the table only from the second half of 2019E. In any case, the real policy rate appears set to remain extremely low in the coming two years.

Also, beware that parliament has approved the 2019 Budget draft already, which plans for a reduction of the deficit to 1.8% of GDP, from the 2.4% targeted for this year, including a sizeable rise in cash reserves. Social security contributions will be reduced by a further 2ppts to 17.5% – which will partly offset the high wage pressures. 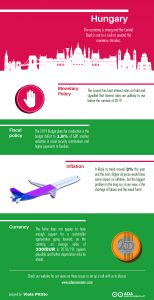