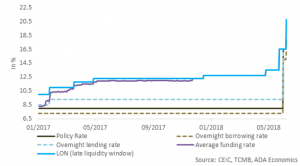 The central bank announced a 125bps increase in the 1-week repo interest rate (the simplified policy rate for funding) to 17.75%, from 16.5% (above the market consensus, which was expecting interest rates to remain untouched), which makes it a 425bps increase in less than a month. This should help support the currency in the short term, stabilising the USD/TRY outlook, and push inflation towards the TCMB’s target in the mid-term, in our view.

We believe it is highly unlikely that the 1-week repo will remain at the hiked peak level for an extended period of time (in both 2011/12 and 2014, the TCMB started easing the LON about three months after the peak). We keep our inflation outlook at above 12% over the next months and average at 10.5% in 2018E. We see a slowdown in Turkey (2Q-3Q), but it should not last long if the global economy remains fuelled by exceptionally low interest rates and does not dip into recession, in our view.